A resource for people wanting to live in the Japanese countryside

Shoot the breeze, chew the fat or whatever you fancy
31 posts

Nice finds and it appears that you are doing really well with the 500 yen coins.

What's the best area you been to find things?

I've had a number of metal detectors over the years. The first one I bought was a White's way back in the 70's. I found more than enough to pay for the detector. At that time they were relatively new and many areas hadn't been cleaned out yet. Found lot's of silver dimes, quarters, and even halves. The universities and schools were great areas to detect.

I then pretty much gave up the hobby and pulled out the machine to use for work during an assignment and everybody laughed at the idea until we hit the jackpot with it. I ended up leaving that machine with work colleagues when I left that job. It was really past its use by date!

I bought my next machine in Honolulu in the mid 80's and had really good luck with the machine on the beaches, at the schools, and away from the beach up in the 'hills'. Unfortunately, none of the banks I went to would exchange the hundreds of pennies and other coins that I had found. Many were in bad shape from the acidic volcanic soil. I ended up throwing the pennies away and using the other coins in vending machines. "Free" Coke for weeks.

My best day was 'up in the hills' when I did a vacant lot with an old tree on it. I first did the bus stop area and picked up a few bucks of clad coinage and then started the lot near the fence and started finding lots of silver coins. Near the tree I got a huge signal and pulled up more silver coins. Checking the hole I still had a strong signal. I carefully pulled the dirt out and out popped an antique gold ring with a diamond. I checked again and still had a strong signal. So dug a little more and this time pulled out an 18k gold cross with Chinese inscriptions on the back. I gave the cross to the daughter and somewhere still have the ring. If I can find it I'll put up a photo.

Later during that same trip I also found another gold and diamond ring on the beach at Waikiki.

I would take it with me every trip so that I had something to do when the kid was taking a nap in the condo.

Took the machine to Australia with me on the first trip here when we were living in Japan. We rented an apartment across from the beach and one late afternoon watched some old guy doing the beach. I thought, oh well, a wasted effort, but went out anyway. The guy must have had one of those cheap pieces of crap that don't do a good job. I ended up pulling a couple hundred dollars worth of coins from that beach. That was the best and only good area I've ever found here in Oz.

I still have that machine and will try and take it out one of these days. I really haven't found much of anything at the beaches around Melbourne nor did I find much when we lived on the Gold Coast. Found one gold ring in the surf one day and helped find a lost ring another day. I would say that the batteries have cost more than I've found!!

When I was in Japan I used it a couple of times and didn't really find much. A few coins and a couple of cheap rings - one silver and one gold. Also found some old bullets and cases when I did an area in Narumi.

( I had better luck in finding coins in vending machines when I'd buy soft drinks for myself and my private student before class!! This one particular machine was near a Pachinko parlor and once found 3000 yen in coins in the coin return slot - more than I ever found with the metal detector in Japan!!)
Top

the Gonbe brothers tend to stick to beaches salt and freshwater.
They do pretty well as do it seems other detectorists in Japan.
Maybe you were just not in the right place.
Top

One of my uncles was into metal detecting and he found a pair of flintlock duelling pistols when search along the river Thames. The Tower of London armoury department offered to restore them for him but he would have to let them be displayed in their museum if he did that so he took them home and on the advice of a friend popped them in a pressure cooker to get all the crud off them. As you can imagine uncle Jack was bitterly disappointed when he opened the cooker and found they'd been reduced to a mass of nearly useless rubbish.
Top

Senor Gonbe has graduated to the Garrett AT Max and his bro bought the Minelab Equinox 800.
This summer should be interesting.
Top

Will be interested to see a report of your results!!
Top

due to the typhoon deluge, the beaches are coughing up some truly old and interesting stuffs..

last week saw lots of gold, including a tiffany ring... and money 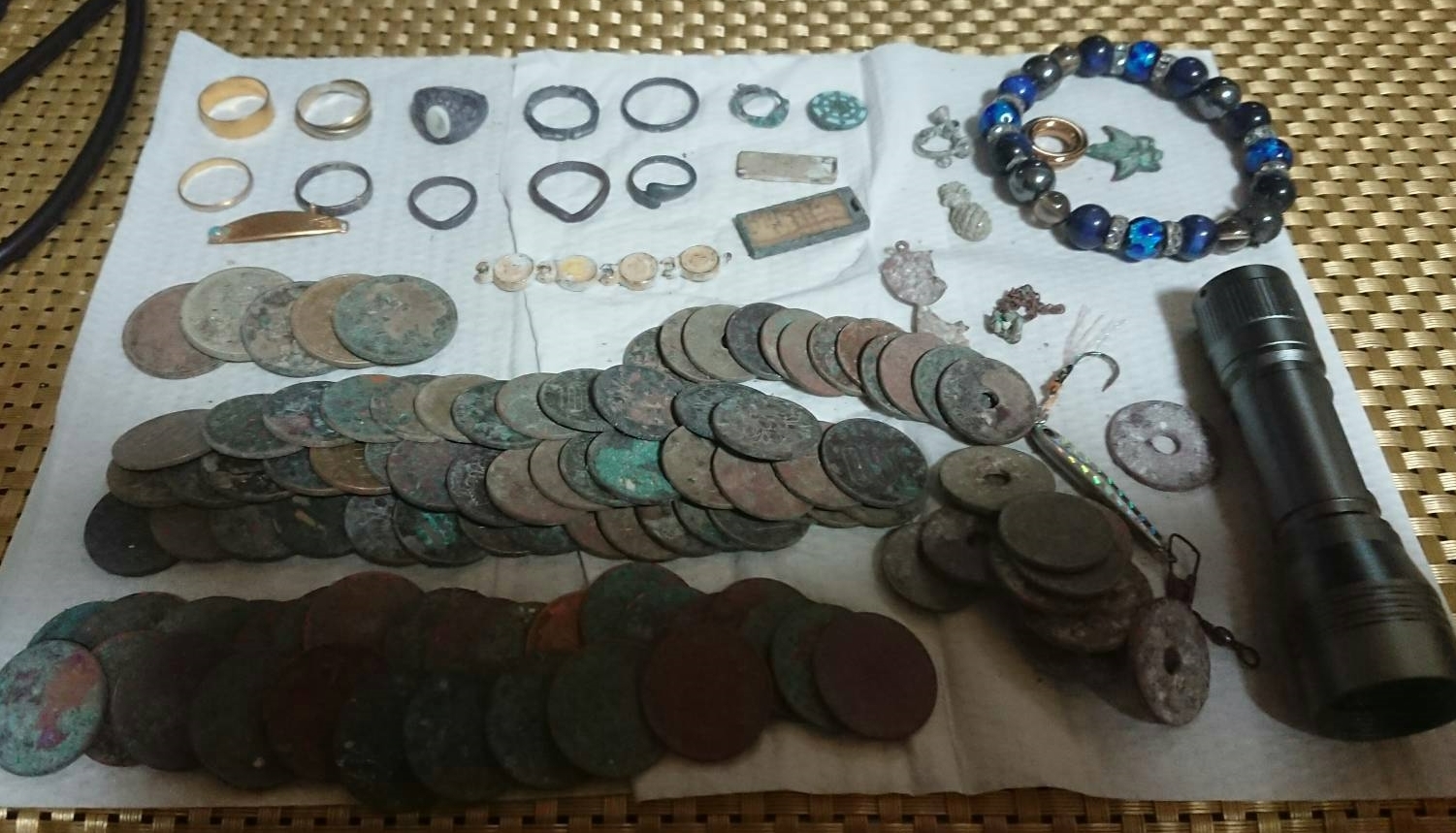 Today was lots of old silver, 1 gold/platinum/diamond ring, several platinum rings and so many coins they aren't in the picture... about 5k worth of mostly 100 and 500 yen coins. 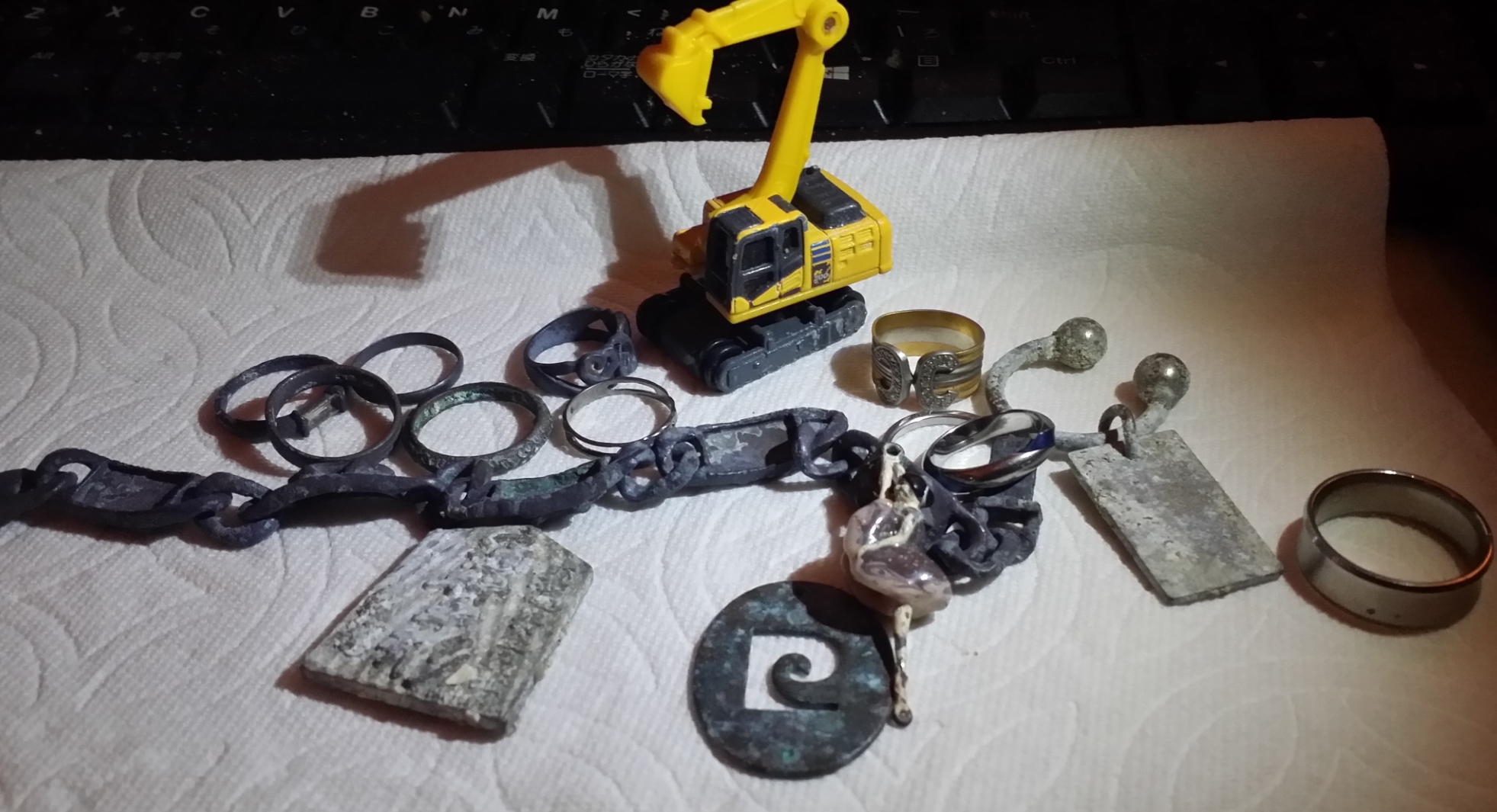 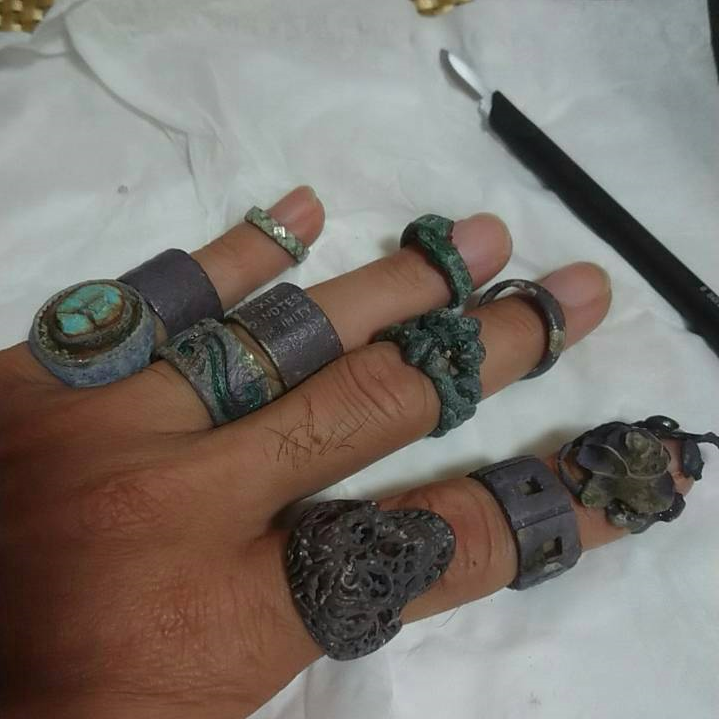 That's an incredible haul Señor Gonbe had, is this all from just one beach ? I imagine it doesn't take many like that for the metal detector to pay for itself.
Top

Some nice finds there.

When I did the beaches I would sometimes find one area near the water line that had numerous coins. Usually you could find these spots from watching the wave action. IIRC at Ala Moana beach I found something like ten quarters in one spot. It also helps if no one had run a machine over the beach for a while too.

Maybe this summer I'll take the machine out to one of the smaller beaches down the Mornington Peninsula that has some shops nearby during a low tide and see what happens.

I guess with people going more 'cashless' around here it limits the number of coins that one will now find which leaves jewelry.

Ever managed to do an old 'abandoned' or somewhat forgotten shrine or temple?
Top

Maybe this summer I'll take the machine out to one of the smaller beaches down the Mornington Peninsula that has some shops nearby during a low tide and see what happens.

Have you ever taken it for a run down at Gunnamatta or say phillip island? I rekon just after schoolies it would be alright!
A bloke i knew used to be the head ranger for the upper yarra and apparently if you can find rock piles out in the old logging coops they sometimes hold stack of gold or coins from the 1800s.
Top

I haven't been down to Phillip Island for something like 16 or 17 years!!!

I'm sure the place has changed quite a bit.

There is a nice small beach across from the shops in Cowes.

They even have a few Tesla charges on the island now!!